Press for the 2019 Marina Del Rey Symphony Concert:
Sights, Sounds and Dance in America
Valerie-Jean Miller wrote an absolutely glowing review of the show for BroadwayWorld.com.
Re: Sirens   The piece was beautifully choreographed and performed by eight radiant and skillful dancers. They danced interpretively, giving us a sense of the emotions and convictions expressed through the music and theme. Modern dance in style, it had movements combined on the floor, in the air, side-by-side, in sections, that truly made us feel the emotions they were conveying. The Orchestra and the Dancers were so "in tune" with each other, it heightened the visual experience. The vocalists added more music to our ears, Soprano Emily Dyer and Bass-Baritone Johann Schram Reed. Besides a showcase of their excellent, strong technique, the dancers danced with passion and joy, with many lovely lifts and inspiring terpsichore galore. The music was very moving and lent to the athletic choreography with it's intricacy and defined accents.

Re: An American in Paris:
The dancers were resplendently attired, and their intricate steps were matched only by the exuberance and the wide-open energy they brought, while executing an amazing amount of beautiful and unique lifts. Being fueled by such masterfully constructed music, they danced their hearts out.
The two lead dancers, Aria Alekzander, vibrant in yellow and en pointe, and Spencer Ramirez, were the main thread of the story, a young couple falling in love. They both did pas de deux together, each took a solo turn or two, and each were outstanding in their performances. Beautiful, strong fouettes and pirouetting penches from Aria Alekzander, and gorgeous leaps and jetes, quadruple pirouettes from Spencer Ramirez.
The choreography fit perfectly with the musical accents and exciting transitions in this exquisite musical selection. There are so many different moods and styles, where again, the choreography completely complimented the music, made it come alive, so to speak. It builds and builds and builds and all of it was so pleasurable to behold! The dancers' joy in performing this was contagious!

...And another from Joanne Divito at LA Dance Chronicle
Re: Sirens  The sprightly dancers graced the Marley stage in front of the orchestra with their lyrical, effervescent and youthful energy.  Dobbs Owen used the full stage to open the piece with explosive choreography, bodies-to-body lifts, with fugues, theme and variations, and question and answer structures.  In their rich teal and grey, the dancers depicted the seafaring tale of Odysseus, and the warning of the beautiful but deadly Siren’s bewitching call.  The costumes so aptly designed by Dobbs Owen and Sylvie Gosse hinted at the water-like essence....
Re: An American in Paris Aria Alekzander, in lemon yellow with Spencer Ramirez, were entrancing, both technically and dramatically.  Their lovely chemistry, professionalism, and elón managed to transport us to bygone days when life and love seemed simpler. Their enchanting pas de deux with their lyrical lines helped deliver Dobbs Owen’s vision, design and her impressive respect for a living classic art.  With the corps of strong male and female dancers surrounding the leads with contrast and support, this ended a truly uplifting evening.
A preview article by Christina Campodonico: Brightly hued costumes in primary colors will add to this joyous energy, adds Owen, along with the technical expertise of the ensemble’s lead couple, Aria Alekzander and Spencer Ramirez.“She’s a full on classical dancer,” says Owen of Alekzander, who will perform on pointe. “She danced for American Ballet Theatre and Houston Ballet. … Spencer has quite a varied resume. He danced for Mark Morris for three years. He’s done Broadway. He’s done ballet. He’s a wonderful, wonderful performer.”
Rewind:  A New 80s Pop Musical, A Roze Bros Production
Check out some of our stellar reviews!
Gia on the Move
Written by 80’s pop songwriters Geoffrey and Sam Rose, Rewind is a well-directed (Nancy Dobbs Owen), unexpectedly touching, and downright fun musical with terrific acting, laughs, and songs you’ll be singing out the door.
The Show Report
What do you get when you put an award winning director together with a team of writers/producers with a Top 10 hit in their pocket? You get “Rewind – A New 80’s Musical!”
Bonnie Priever
Each member of the ensemble (Slade; Haynes; David Sasik; Megan Beard; Chris Kerrigan; Natalie Miller; and Thomas Adoue Polk) adds his/her own twist (literally) and personal style to each song and dance number, exquisitely choreographed and directed by Nancy Dobbs Owen.
Broadway World
There are an abundance of songs-and-dances that are really a joy to behold with clever, witty dance moves from the '80s, choreographed expertly by Nancy Dobbs Owen, who also Directed this quick-paced fantasy, not missing a beat or an extra touch, giving the audience a reason to smile throughout.

Too Many Bodies: Place Called Us
Press and Festival goodness has started to come in for our music video for gun reform:
Here is a lovely video of Audience Feedback from the LA Experimental Festival, which took place in September, 2019
PRESS:
VoyageLA wrote a wonderful article about the entire Too Many Bodies LA team. Check it out here. My answer to the question  "Has luck played a meaningful role in your life and business?"
Luck is a funny word.  I have found that hard work, commitment and passion come together in ways that can sometimes appear lucky. You can be in the right place at the right time, but if you are unprepared or unprofessional, that “luck” can and will change instantly.  So, I just work to be as prepared as possible, as professional as possible, and as kind as possible so that people want to work with me. That way, I am ready for that lucky moment when my preparation and their needs cross paths.
Dance Enthusiast interviewed me about the making and message of Too Many Bodies.
Read it here! It's basically all of my own words, so I hope you enjoy it!
Dance Magazine wrote up on the zeitgeist of dance films protesting gun violence and featured Too Many Bodies.  Check it out here!
Choreographed by Nancy Dobbs Owen and performed by several young dancers from California, "Too Many Bodies" follows a student crawling out of a closet after a shooting, walking past fallen classmates and teachers who come back to life and begin to dance, showcasing all that's lost when these lives end too soon.
Nothing like a write up in your home newspaper!
Leah Garchik of the San Francisco Chronicle attended our SF Film Society Launch and panel discussion and wrote about it for the paper.
The movie isn’t bloody, the point made instead by elegant choreography by Nancy Dobbs Owen, music by Alex Mackey and photography by Daphne Wu.
Here is a wonderful article on the video and LA launch event by Valerie-Jean Miller.  I've excerpted a few quotes, but invite you to read the entire article!
-As the lyrics begin, we move through an empty hallway, then back to the classroom, where, as the girl steps over the bodies, they rise and begin to dance slowly, passionately, starting to carry on activities done at school, and help each other to get up, supporting each other thru subtle dance moves and caresses. It is a very loving, caring dance and the lyrics are hauntingly beautiful.
-The dancers in the video were lovely, fluid and performed with clear intent. They included Nate Odell, Amir Yorke, Mia Lind, Malcolm Buchanan, Alexandra Woodley, Agnes Anglade, Eryn Orsburn, Kelly Perez and Jason Vu. Bravo to Nancy Dobbs Owen for her creative contribution in crafting the steps that made the lyrics so meaningful.
Jeff Slayton from LA Dance Chronicle also attended and wrote a lovely piece.  I urge you to read it, as the emotions captured were just what we hope for.
Bernstein at 100: Marina Del Rey Symphony Ballet at Burton Chase Park
There is so much love in the review from Broadway World, written by Valerie-Jean Miller.  Here is a paragraph on West Side Story Suites, but check out the whole review here.

"The grand finale was a perfect last piece. The Orchestra played the bejesus out of "Symphonic Dances from 'West Side Story, '" the iconic genius combination of Leonard Bernstein's music and Jerome Robbin's Choreography. The dancers were on their toes, in the air, on the ground, double-pirouetting and acting out in movement, the story of two New York gangs in the 1960s, what life was like and the tragedy that befalls them. ..... They took us through the "Prologue," the Adagio of "Somewhere" with beautiful partner work, clean and lovingly executed, the gym dance, or "Mambo" which was pure fun to watch, as they mixed balletic dancing with playful antics, interesting lifts and break out in a feverish mambo challenge and group section that made the musical notes seem to dance off the page and come to life. Followed by the Meeting Scene, and the famous "Cool" jazz sequence, the Rumble, and then the soaringly exquisite "Finale," each section was cleverly a mixture of an homage to Mr. Robbins and some inventive, substantial choreography.
I loved the dance sections where acrobatics and tumbling, the knee spins, double and triple pirouettes, and a few flick-kick jumps that I've never quite seen before were used to accent the urgency, intertwined with strong balletic movements that swept you away. All perfectly aligned and placed and performed excellently." 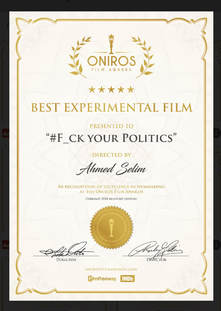 F_ckYourPolitics
We won our first (of many we hope) film festivals as Best Experimental Film at the Oniros Film Awards based out of Italy. We are so proud of our collaborative team of artists and dancers and look forward to the possibility of many more festival accolades.
Welcome To The White Room
-and dance choreographer Nancy Dobbs Owen's highly original take on the tango and you’ve got one of Theatre Of NOTE’s best designed and choreographed productions ever.
*StageSceneLA

-Marcks and Gardner, and then Marcks and Uy, dance seductive tangos thanks to dance choreography by Nancy Dobbs Owen
*BroadwayWorld

Scenie Winner: Outstanding Choreography
Enron
-Add to all of the above a song-and-dance number to accompany a commodities-trading sequence and a thrilling eight-combatant Star Wars-style light saber duel to illustrate California’s electricity deregulation and Enron simply could not be more theatrical....
Owen’s inventive choreography (which her cast execute quite splendidly with Yoder as dance captain) and.....exhilarating fight choreography both deserve thumbs up as does Daniel Halden’s vocal direction of barbershop foursome Buis, Jones, McClure, and Nazemetz.
*StageSceneLA

-Director August Viverito, with help from choreographer Nancy Dobbs Owen, has injected as much energy and spunk into the evening as possible and the dedicated cast goes at it full bore
*Haines His Way

-overall, the big numbers are fun and well choreographed (Nancy Dobbs Owen)
*Theatre Eddys
*War Bride
-Macher and director Nancy Dobbs Owen have a field day skewering a gamut of melodramatic tropes by slathering them with a rich sauce of Sirkian irony and J-Horror.
*LA Weekly (Note: this was a positive review. We asked)

-“War Bride” is a wonderfully written play and cleverly directed with some of the most intense stage performances you will see. It is a moving and passionate play that you will remember long after you see it.
*NOHO Arts

-Director Nancy Dobbs Owen creates a moving piece of theater through the combination of fine acting, production work, and symbolism. She inspires moving performances from her actors.
*Tolucan Times

Working
It’s Working’s musical numbers, however, that make it such a crowd-pleaser, especially as directed by August Viverito (on top of his game) and choreographed by Nancy Dobbs Owen (seamlessly integrating movement and dance into Viverito-directed scenes).
*StageSceneLA